Chris Bath returned to screens around Australia as the host of nightly entertainment program Invictus Games Today, during the Invictus Games Sydney 2018 on ABC.

The prime-time show was broadcast out of the Invictus Games precinct at Sydney Olympic Park. Invictus Games Today was a lively half-hour that captures – and helps create – the spirit of the Games, delivering a nightly roundup of results and achievements. 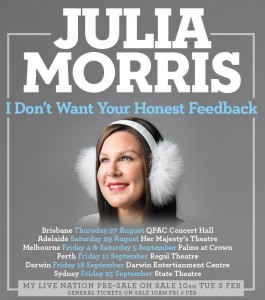 ‘I Don’t Want Your Honest Feedback’… Julia will be ignoring your advice in Melbourne, Sydney, Perth, Adelaide, Brisbane and Darwin later in 2015.

Sign up to www.livenation.com.au to access the pre-sale which starts on Tuesday 3rd Feb at 10.00am. For all the tour & ticketing info, head to the official Julia Morris tour page here: http://lvna.co/JuliaMorrisTour